WATERTODAY reached out to Dayton’s Department of Water. Here is what we learned from Keshia L. Kinney, Division Manager, about the two water treatment plants serving 400,000 people in Montgomery County and parts of Greene County.

Dayton benefits from a plentiful groundwater supply known as the Great Miami Buried Valley Aquifer (GMBVA) which was designated a Sole Source Aquifer in May, 1888. Replenished by water that seeps down from the overlying rivers, GMBVA is the sole source of drinking water for the entire Dayton region.

The aquifer is comprised of sand and gravel deposits, completely saturated with water, which stores approximately 1.5 trillion gallons of water. Rivers, streams, and lakes quickly recharge the aquifer, making the groundwater a truly renewable resource.

In Southwest Ohio and the Miami Valley, several business sectors use groundwater as an essential element of their business.

Groundwater in the Dayton region is extremely susceptible to contamination at the surface. For this reason, the City of Dayton established a

A Multi-Jurisdictional Source Water Protection Program that seizes on the prevention of increased risk and the reduction of existing risk.

The approximate average daily plant flow between the two plants is 60-64 MGD.

The City’s water supply remains in compliance with current rules and regulations. As public health is a top concern, we continue to stay abreast of regulatory changes, best management practices, and new technology.

HABs are not a concern as both the raw and effluent water has remained non-detect since monitoring was first implemented in 2015. 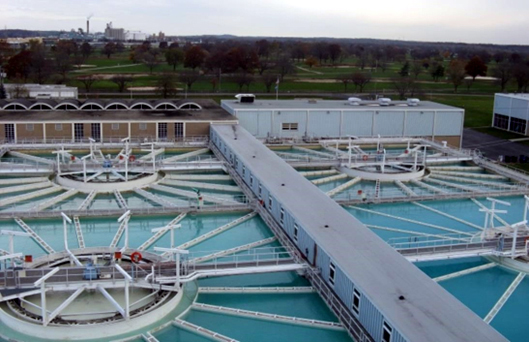 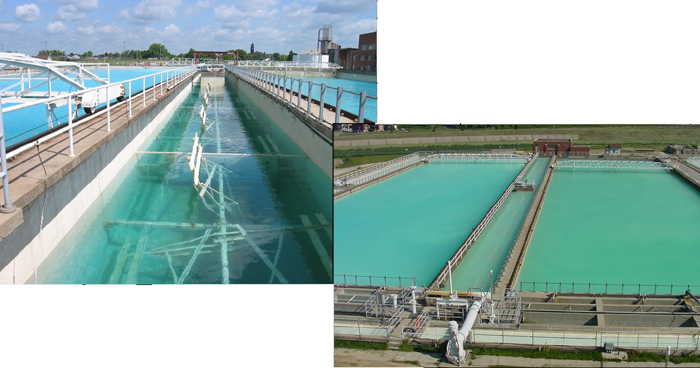 OWTP and MWTP are conventional lime softening facilities, which are rated at 96 MGD each.

The City of Dayton is one of two water systems to have a Lime Reclamation Facility (LRF) in the United States. The other system is in Miami Dade.

The LRF has been in continuous operation since 1957 and produced over 35,000 tons of lime in 2021. Both the pebble lime and the carbon dioxide byproduct oblige and hold the NSF/ANSI Standard 60 requirements for water additives. 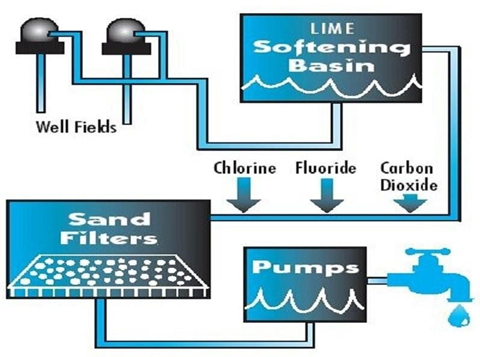 The treatment process starts with the addition of a lime slurry to the raw water in the rapid mix, which is for coagulation. The water moves to the flocculation basins, where the slow mixing of chemicals creates floc particles. The floc is settled out in the sedimentation basins. Basin effluent is directed to the recarbonation channels where chemicals are added: carbon dioxide to stabilize the water, fluoride for dental health, and chlorine gas for disinfection. 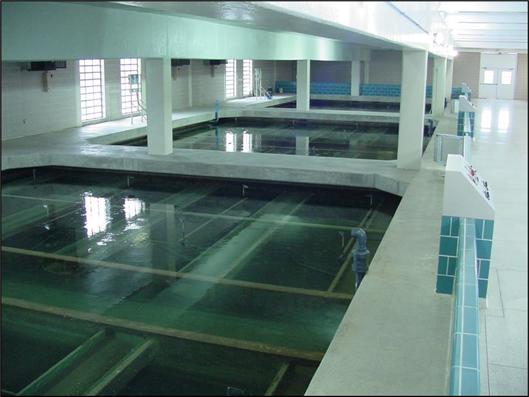 Rapid Sand Filters
After the chemical additions, water is filtered through the sand filters for the removal of smaller particles not removed during the sedimentation process. The final step prior to distribution is contact time through the clear well
Photo Courtesy Dayton Ohio Water Department

Dayton uses monitoring wells to provide early warning of possible risks. These wells ensure the quality of our water. Testing of monitoring wells detected PFAS at low levels in some of the wells. Dayton shut down 8 nearby production wells as a precautionary action that did not affect customers. 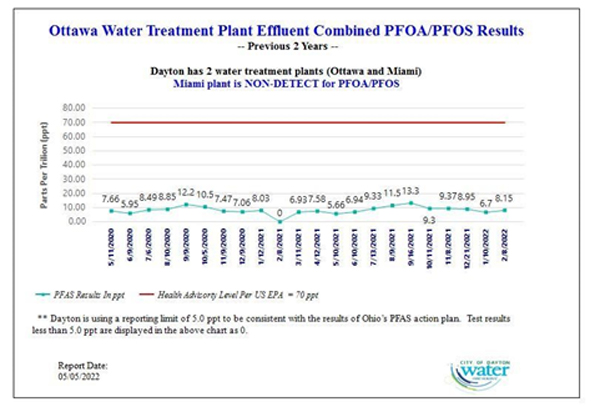 This chart provides the levels of PFOA/PFOS compounds in the effluent at the Ottawa Water Treatment Plant. The levels at the Miami Water Treatment Plant are non-detect. The system is designed so that monitoring wells can detect contaminants in groundwater before it reaches the production wells

The City has engaged an environmental consultant to complete a Feasibility Study that will determine how best to address the PFAS issue.

Dayton will look to be repaid for PFAS mitigation by those who caused the problem.

Redundancy or duplicate systems lessen service interruptions. Since 1954 the City has had only two water system-wide service disruptions that included system-wide boil water advisories. This stellar record can be credited to the redundancy of our water treatment plants, pump stations, well fields, and electric feeds. Additionally, in the case of a major main break, the robust distribution system allows routing water to areas where it is needed.

A Splash of Educational Fun

The treatment plant staff participates in tours of the facilities and gives educational presentations.