“Whether your water comes from a municipal water supply in town or a well in the countryside, if you live over what is commonly called the Michindoh Aquifer, your water comes from an underground aquifer system that covers nine counties within three states – Michigan, Indiana, and Ohio – The aquifer is the sole source of drinking water!” -- The Williams County Alliance

Massachusetts company, AquaBounty (AQB), a land-based aquaculture operation has submitted a Water and Consumptive Use Permit Application to the Ohio Department of Natural Resources (ODNR) Division of Water for two proposed well fields near Pioneer Ohio.

AQB’s Application states the need for 5 million gallons of water per day.

The water withdrawals will be used to support America’s largest indoor-rearing facility for genetically modified salmon.

Nearly the same amount of the daily water draw will be treated and discharged into the St. Joseph River, which flows down to Fort Wayne, then to the Maumee River toward western Lake Erie. 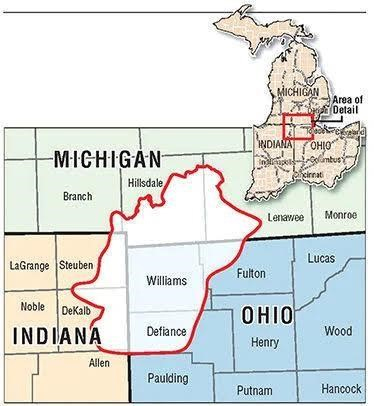 According to the Ohio-Kentucky-Indiana Water Science Centre in co-operation with the Ohio Environmental Protection Agency, published on the USGS website:

“The glacial deposits that are part of the aquifer system, informally known as the ‘Michindoh Aquifer’ are a principal source of water for local communities, agriculture, and industry in the region. More recently, these groundwater resources are being discussed as a possible source of water supply to western suburbs of Toledo.”

The scientific study goes on to state that more research is required to fully understand the complexities of the aquifer.

“Long-term understanding of the water budget of the region is of critical interest to residents, agriculture, commerce, and future development as the aquifer is the only source of drinking water to the area. Improved mapping of the extent of the aquifer deposits is of critical need to assess water resources.”

Sherry Fleming, spokesperson for the William County Alliance who reached out to WATERTODAY, told us, “The USGS study needs to be completed to better understand the aquifer system’s interactions and capacities. Why should we allow big industry to come in before we understand it?”

Fleming informed WT that since the announcement of this project, tax abatements have been granted, federal HUD funds rerouted, and millions of dollars in bonds have been approved to support the financing of the project despite the fact that only one well has been developed successfully and no environmental review of the discharge has been done.

“Moreover, at no time have the citizens living over the Michindoh Aquifer had any input or representation.”

Fleming adds that the massive withdrawal from the area’s only source of drinking water and the impacts from the discharge of nearly the same amount of water into a local river “could result in flooding, destruction of habitat, and pollution. Approval of AquaBounty’s permit would set a troubling precedent for future large water withdrawals from the Michindoh aquifer system.”

WT contacted AquaBounty for comment but was unable to elicit a response.

The proposal presented by AQB is expected to cost $290 M to $320M to generate 100-120 jobs and yield $15M over 15 years for schools, primarily those in the North Central Local School District.

“Our Alliance is rightly concerned about the mass impact on our communities,” Fleming says. “We should have a role in the decision-making process. The Law needs to be changed to shift the recognition of water from a commodity to one that recognizes the critical relationship between people and ecosystems. It’s the water we depend upon for survival.”

It is now up to the OH Department of Natural Resources to decide. A public comment period ends February 22, 2022.